Tales of an Explorer from the Bluegrass State

Something that often attracts new businesses to locate in Lexington is our city’s close proximity to so many places in the eastern half of the United States.  Lexington is easily within a day’s drive (or less) from Atlanta, Charlotte, Pittsburgh, Memphis, Chicago, Savannah, St. Louis, and Washington, D.C., just to name a few.  Closer to home, we’re within about three hours of Indianapolis, Nashville, Cincinnati, and if you add one more hour, you’ll be in Asheville.  I’ve been visiting Cincinnati, in particular, since I was a young girl.  My dad and I bonded early over our love of sports, and baseball was at the top of our list.  We spent many summer afternoons and evenings in the stands of Riverfront Stadium (later known as Cinergy Field) cheering on the Cincinnati Redlegs.  I first saw The Sandlot right about the time I began my softball career, and from then on, I was hooked on all things baseball.  I have great memories of watching José Rijo, Chris Sabo, and Ken Griffey, Jr. take the field and watching every last play to make sure that I accurately kept the book of the day’s game.

The strange thing I recently realized is that, even though I’ve been to countless Reds games, I really haven’t spent all that much time actually enjoying their hometown.  Cincinnati has so much to offer and it’s just over an hour away from my house, so Mr. WACH and I set out for a day exploring some of its main attractions.  I had no idea that the Cincinnati Art Museum in Eden Park is one of the oldest art museums in the United States.  Founded in 1881, it was the first purpose-built art museum west of the Allegheny Mountains, and it now boasts a collection of more than 60,000 pieces.

Visitors are welcomed to the museum grounds by Jim Dine’s twelve-foot bronze sculpture titled “Pinocchio (Emotional)” as they enter the parking lot.  Parking is only $4, and admission to the museum is free thanks to generous donors.  The entrance to the museum is overseen by a Dale Chihuly’s “Rio delle Torreselle,” an impressive hand-blown glass chandelier measuring 11 feet high and seven feet wide, weighing in at 810 pounds, and consisting of 282 separate pieces of glass.  On the ground floor, the museum features a large collection of artifacts dating back thousands of years from ancient Egyptian, Middle Eastern, and Asian cultures.  There are sarcophagi, canopic jars, and statues from Egypt, large Buddhist sculptures from Asia, and jewelry and pottery from the B.C. and early A.D. eras of the Middle East, among many other exhibits.  Perhaps my favorite work from this section of the museum is the “Room from Damascus,” an early 18th century room that a collector salvaged from a building in Damascus, Syria that was set for demolition, kept in his Cincinnati home for several years, and eventually donated to the Cincinnati Art Museum.  The detail on the wood panels surrounding all four walls and the ceiling of this small room is exquisite, and it’s easy to see why someone would want a room like this in their home for time for reflection and study. 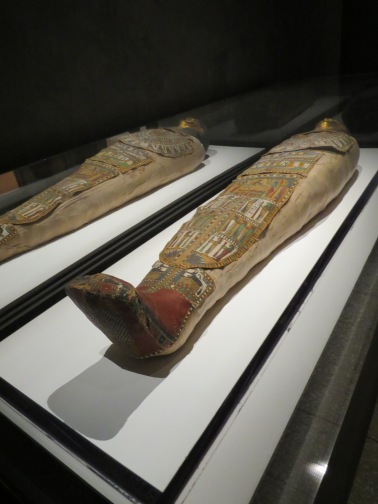 Also on the first floor of the museum are several exhibits dedicated to the history of art in Cincinnati.  From my visit, I learned that Cincinnati was once a leader in the production of decorative ceramic arts and was highly regarded for custom carved wood furnishings.  To add an extra dimension to the furniture exhibitions and several others, the museum curators have styled them as if they were rooms in a private home so that viewers might have a better idea of what these works looked like when they were originally created.

The second floor of the museum boasts a copious collection of paintings, including many from masters of impressionism, cubism, and pop art, as well as Tiffany and other glass work.  Impressionism has long been my favorite art movement, and I was thrilled to see works by Claude Monet, Pierre-Auguste Renoir, Camille Pissarro, Vincent Van Gogh, and Édouard Manet.  On special exhibit right now is one of the very last paintings ever completed by Van Gogh, “Undergrowth with Two Figures.”  Works by Mary Cassatt, Alfred Sisley, John Singer Sargent, and Pablo Picasso are also on display in this area, nestled amongst numerous other beautiful paintings from artists spanning the globe and the centuries.  An especially fun area of the second floor of the museum is dedicated to folk art, and kids can enjoy making their own art with an interactive computer canvas.

The museum’s special exhibition at the moment is devoted to modern art, specifically Tom Wesselman.  I’ve never been much of a fan of modern art, but I enjoyed examining many of Wesselman’s bold, oversized, and three-dimensional pieces made to inspire viewers to be nostalgic for times past.  A nod to the museum’s Cincinnati home, a large work by Andy Warhol featuring four different-colored versions of the baseball card of famous Reds player Pete Rose is also in this area.

Although we didn’t stop in for a bite, the museum’s full service restaurant was full of customers happily enjoying their brunch with a view of an enormous mural as they dined.  I often find that museum gift shops contain a wonderful variety of gifts that can’t be found anywhere else, and the Cincinnati Art Museum’s gift shop didn’t disappoint.  It had handcrafted jewelry, beautiful books and stationery, games for children, small works of art, and an impressive selection of tableware and home decor items.  With all of this just a few miles away from Lexington, I’d recommend it to anyone and everyone who enjoys art!